China’s coal imports in the first half of 2014 grew just 0.9%, compared with 13.3% a year earlier. The WSJ’s Ramy Inocencio speaks with Beijing reporter Wayne Ma on the trend’s winners and losers.

Beijing’s figures on coal imports and domestic production this year indicate sharply weaker demand, which experts say stems from slowing growth in the world’s No. 2 economy. Longer term, factors including new policies to curb air pollution by limiting coal use are likely to keep growth in coal consumption far below the double-digit increases of the past.

The slowdown already is affecting the production plans of companies in Australia, China’s largest overseas supplier.

“If the economy can speed up again, I think the situation for coal will be better because demand from small factories and small power companies will be better,” said Thomas Deng, an analyst at consulting firm ICIS C1 Energy. “But the overall trend is slowing down.”

China produces and consumes nearly as much coal as the rest of the world combined, and the fuel accounts for about 70% of the country’s energy mix.

Most of that is provided by domestic mines, with the rest coming largely from mines in Australia and Indonesia. Explosive demand—fueled by double-digit annual economic growth—pushed imports of coal to annual increases in the double digits as well. 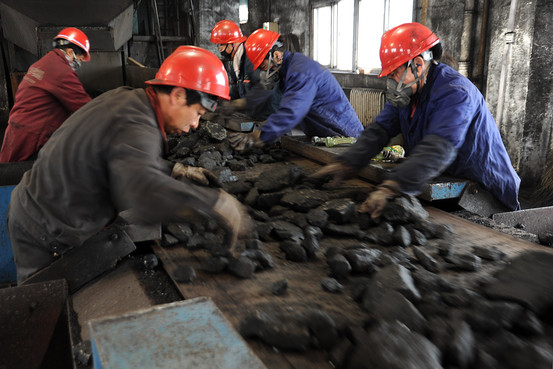 That rippled into a wave of Australian investment. Mining companies in the country have spent billions of dollars on new coal mines in recent years. The construction of Queensland’s Caval Ridge mine for coal used in making steel cost a joint venture of BHP Billiton BHP.AU -0.08% and Mitsubishi Corp. 8058.TO +0.11% about US$4 billion.

Chinese economic growth has slowed in recent years as Beijing seeks to remake its export-dependent economy. Pollution controls and shutting factories in sectors plagued with overcapacity in turn have slashed demand for energy used in everything from manufacturing, to processing steel and other construction materials.

A decade ago, China’s coal consumption regularly rose by more than double-digit percentages each year, according to the BP Statistical Review of World Energy. After slumping to 3.7% annual growth in 2008 during the financial crisis, coal-consumption growth stayed above 5% annually until 2013, when it again fell to 3.7%.

China’s cooler coal-import growth also may be the result of increased competitiveness of domestic coal and the potential for restrictions on imports of low-grade coal, the Australian government said in a quarterly report. 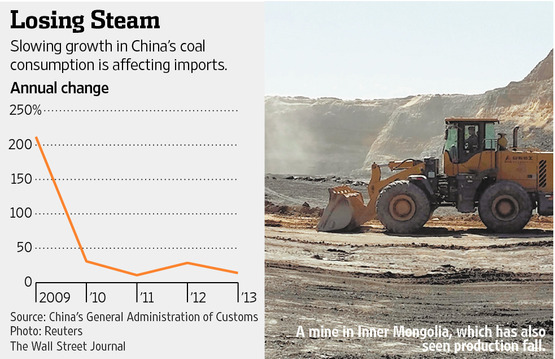 In the first five months of this year, China’s coal output shrank from a year earlier, according to the country’s National Development and Reform Commission. Coal production in China’s Inner Mongolia region, which accounts for about a quarter of the country’s output, fell 9.3% in the first half to 452 million tons.

Yet China’s coal stockpiles are flush. Supplies at the port of Qinhuangdao, was 7.27 million tons last week, up 2.5% from the previous week and 13.6% from a year earlier, according to ICIS C1 Energy.

The Australian government expects prices for thermal coal, which is used to generate electricity, to keep declining next year as demand slows. The government forecasts that Chinese thermal-coal imports will rise 3.6% this year and 2.7% in 2015, after increasing 15% last year.

Slower Chinese imports have hurt coal producers in Australia and made many mines unprofitable. Glencore GLEN.LN +0.87% PLC plans to close its Ravensworth mine in Australia this year. Before its merger with trading firm Glencore, miner Xstrata PLC spent roughly US$1 billion to take control of the mine by acquiring owner Resource Pacific Holdings Ltd. in 2008.

The industry has also sold assets and halted other development. Glencore’s Balaclava Island Coal Export Terminal, which was designed to ship 35 million tons a year, was shelved last year. Queensland last month delayed plans for two terminals at Dudgeon Point intended to handle 180 million tons of coal a year for export to Asia.

Slack coal imports have also hurt Indonesian miners. “Demand for coal from China is declining because of the economic slowdown there. And now, they prefer to consume coal mined in China instead of imports,” said Jeffrey Mulyono, the chief executive of coal miner PT Pesono Khatulistiwa Nusantara.