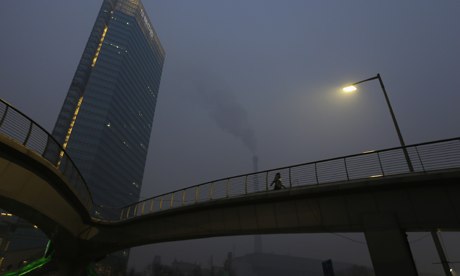 A woman walks along a pedestrian bridge as a coal-burning power plant spews out smoke in Beijing. Photograph: Jason Lee/Reuters

Emissions from coal plants in China were responsible for a quarter of a million premature deaths in 2011 and are damaging the health of hundreds of thousands of Chinese children, according to a new study.

The study by a US air pollution expert, commissioned by Greenpeace, comes as many areas in northern and eastern China have been experiencing hazardous levels of air pollution in recent weeks.

In some eastern cities including Shanghai, levels were off the index that tracks dangerous pollution, with schools closing and flights being cancelled or diverted. Sales of air purifiers and face masks have soared with many retailers selling out of stock as residents try to protect themselves from the poisonous smog. In Jiangsu and Zhejiang provinces visibility was reduced to less than 50 metres earlier this week and in the city of Nanjing a red alert for pollution was maintained for five consecutive days.

The analysis traced the chemicals which are made airborne from burning coal and found a number of health damages were caused as a result. It estimates that coal burning in China was responsible for reducing the lives of 260,000 people in 2011. It also found that in the same year it led to 320,000 children and 61,000 adults suffering from asthma, 36,000 babies being born with low weight and was responsible for 340,000 hospital visits and 141 million days of sick leave.

“This study provides an unprecedentedly detailed picture of the health fallout from China’s coal burning,” said Dr Andrew Gray, a US-based expert on air pollution, who conducted the research. Using computer simulations, Gray said he was able to “draw a clear map tracing the trail of health damages left by the coal fumes released by every power plant in China, untangling the contribution of individual companies, provinces and power stations to the air pollution crisis gripping the country.”

Isabel Hilton, editor of China Dialogue, an independent website that publishes information and debate on the environment in China, said coal is the main cause of the country’s air pollution problems. Coal burning in China “produces heavy metal pollution and produces particulate pollution on a scale that is getting quite extraordinary,” she said.

China is the world’s largest consumer of coal, which is its main energy source, and is responsible for around half the world’s coal consumption. The impacts of its reliance on coal are becoming more well known and recently there was much online discussion after an eight-year-old girl was diagnosed with lung cancer which her doctor blamed on air pollution.

According to Gray’s study, while the growth of coal consumption has slowed, 570 new coal-fired plants are either being built or are planned, and if they go ahead would be responsible for a further 32,000 premature deaths each year.

In September, the Chinese government announced a plan to tackle the high levels of air pollution including for the first time measures to cut coal consumption. Under the plan, China aims to cut air pollution in some of the worst affected areas including Beijing by 2017.

“The government has been forced into much greater transparency on the data,” she added. “But I do think the ambition has to be raised quite a lot.”

For more information check out this interactive map from Greenpeace that maps the health impacts of China’s coal power plants.