Many Countries Rely on Fuel for Export Revenue, Cheap Power

LIMA, Peru—The push for a global climate deal is leading to calls for large cutbacks in the use of coal, provoking stiff opposition from coal producers and exporting countries.

Representatives from nearly 200 governments have been in talks here since Dec. 1 to reach an agreement next year for cutting carbon dioxide emissions after 2020, with a goal of eventually limiting global warming to a total of 2 degrees Celsius compared with preindustrial levels.

Many developed economies, which are cutting coal’s share of electricity production at home and promoting other fuels, are discouraging governments and international institutions from investing in new coal plants that would feed the growing energy appetite of poorer countries. Natural gas and some other fuels release less carbon dioxide in proportion to the energy they provide.

“Coal and oil may be cheap ways to power an economy today in the near term,” U.S. Secretary of State John Kerry said in Lima. “But I urge nations around the world, the vast majority of whom are represented here at the conference: Look further down the road.”

“Coal is a source of energy that the past was based on, not a source that the future will be based on,” said Susan McDade, deputy assistant administrator of the United Nations Development Program, which finances projects in developing countries.

And the head of the Chinese delegation called out Tokyo for not following its example of submitting an early target for reduced carbon dioxide emissions, in effect highlighting Japan’s reliance on coal after the Fukushima nuclear disaster. Japan’s envoy said the coal-dependence “situation is going to be improved.”

But the anticoal rhetoric is putting coal’s champions on the defensive and stirring political opposition back home, including in the U.S., as industry giants seek to promote coal as a cheap fuel for developing countries. 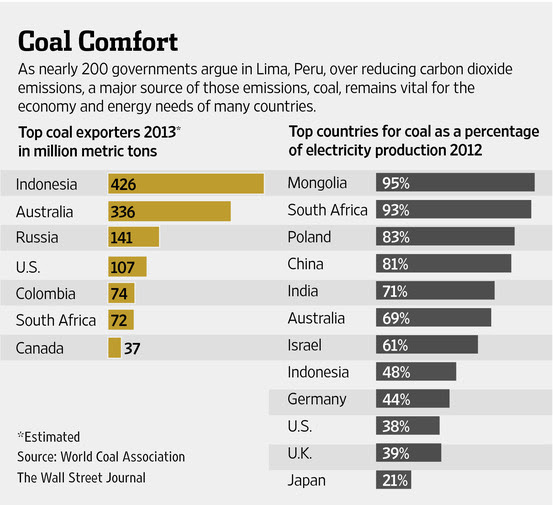 Representatives of the coal industry organized a panel in Lima aiming to dissuade investors and endowments from divesting from their fuel.

As part of the international talks, the Obama administration is offering an emissions plan that relies heavily on reducing emissions at coal plants. Chinese President Xi Jinping announced his country’s plan alongside President Barack Obama last month, pledging to stop increasing his country’s carbon emissions by 2030 and boost the share of nonfossil fuels to 20% of the energy supply. Beijing also said it would cap coal use. The European Union promised deep emissions cuts in October.

But after leading industrialized economies—including China, the biggest source of emissions—pledge to make cuts, some participants worry that developing countries, including India, will pick up the slack, potentially boosting coal consumption in inefficient plants with high levels of pollution.

To keep richer countries’ extra coal from being burned in poorer countries, the U.S., the World Bank, the United Nations and others are curtailing funding for coal-fired electricity in developing countries, including in Asia, where the industry hopes consumption will grow in coming decades.

Coal-industry leaders say that approach is wrong, and that public money instead should go toward making coal plants cleaner and on technology to capture most of the plants’ carbon dioxide emissions, known as carbon capture and storage.

“The climate negotiations really need to look for a way to help them use coal in the cleanest and most efficient way responsible,” said Benjamin Sporton, acting chief executive of the World Coal Association in London. “Without carbon capture and storage, there’s a fair chance you might struggle to achieve that 2-degrees target.”

In the U.S., Republicans this past week used legislation that would fund the government next year to hinder President Obama’s efforts to limit investments by U.S. agencies in overseas coal-fired power plants. The party is also seeking to use gains in congressional elections to roll back the Environmental Protection Agency’s power-plant regulations.

The U.S. has doubled coal exports in the past decade, and miners around the world want to preserve their ability to extract and export coal, even if political pressure makes it harder to use the fuel at home.

“The countries that have said ‘no’ to coal haven’t been as successful economically,” said Vic Svec, senior vice president of investor relations at Peabody Energy Corp. , the biggest nonstate coal producer.

Overall, new government policies are expected to help slow the growth in coal demand to 0.5% a year through 2040, compared with growth of 2.5% during the past 30 years, according to the International Energy Agency. A global pact to meet the main climate-change goal under discussion in Lima would cut significantly more from future demand.

Australian Prime Minister Tony Abbott opened a new $3.9 billion coal mine in central Queensland state in October. Australia is the second-biggest exporter of coal after Indonesia, according to the World Coal Association, shipping 336 million metric tons last year, or three times as much as the U.S. Mr. Abbott, at the mine opening, declared that coal is “good for humanity” and will be the “world’s main energy source for decades to come.”

Less coal-dependent economies are arguing the opposite. In California, environmental activists are seeking to block coal-export terminals, as well as the use of electricity from fossil fuels.

Of course, some countries are likely to shift only slowly away from coal. While Mr. De León criticized coal at the climate conference in Lima, an environmental group nearby offered a mock coal trophy to the Polish delegation for “being blind to the growing momentum behind the clean-energy transition and proposing a range of new coal-related projects.”

Poland is seeking to reduce its dependence on Russian gas and relies on coal for an estimated 83% of its electricity production, or twice the world’s average.

— Rob Taylor in Canberra, Australia, and John W. Miller in Pittsburgh contributed to this article.