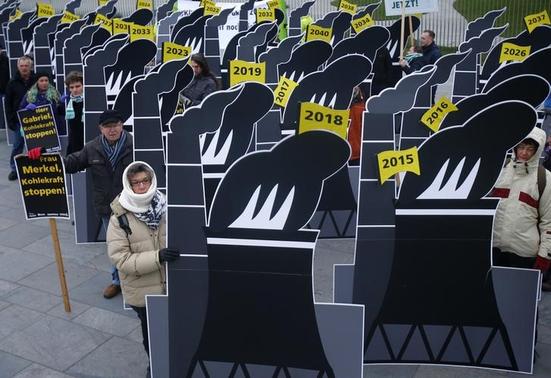 Germany’s cabinet approved a new plan on Wednesday to slash CO2 emissions in order to meet its ambitious climate targets, but environmental groups criticized the government for not going further in reducing its reliance on coal-fired power plants.

The package, which includes an energy efficiency program that could trigger billions of euros in investment, is essential if Germany is to hit its goal of a 40 percent drop in emissions by 2020 from 1990 levels. The broader EU is aiming to cut emissions by the same amount by 2030.

“This is the most comprehensive climate protection package that a German government has ever presented,” said Environment Minister Barbara Hendricks.

She said if no additional steps were taken, Germany, Europe’s biggest economy, would miss its target by between five and eight percentage points and all relevant sectors, from power to transport, must contribute.

Environmental groups said the steps were not ambitious enough. A group of 50 activists set off black smoke outside Chancellor Angela Merkel’s office in Berlin and shouted: “Exit coal to protect the climate!”

Coal accounts for about a third of Germany’s CO2 emissions.

The steps send a signal to global talks underway in Lima, Peru, which are meant to lay the groundwork for a U.N. deal on climate change next year.

After the Fukushima disaster in Japan in 2011, the conservative Merkel accelerated a shift into renewables and away from nuclear and fossil fuels.

The closely-watched experiment, known as the “Energiewende” or energy shift, has hit traditional energy firms, as seen by utility E.ON’s radical decision this week to spin off its power plants.

Emissions are up again after sliding in the 1990s due to the post-reunification modernization of East German industry.

The most contested step is making coal plant operators reduce emissions by at least 22 million tonnes, equivalent to shutting about eight plants. This makes up over a quarter of the 78 million tonne reduction planned by 2020.

Industry groups say Merkel’s plans will hurt the export-oriented economy and jobs and that any output gap will be offset by imports from fossil fuel plants in neighboring countries.

“I understand this is difficult for industry but we cannot achieve our targets without a contribution from the power sector,” Economy and Energy Minister Sigmar Gabriel said.

The package envisages savings of 25-30 million tonnes of CO2 emissions via a national energy efficiency plan to modernize and insulate buildings. It also includes incentives for electric cars and stricter rules on fertilisers and waste.

The opposition Greens described the package as “a hodge podge of nothingness”.