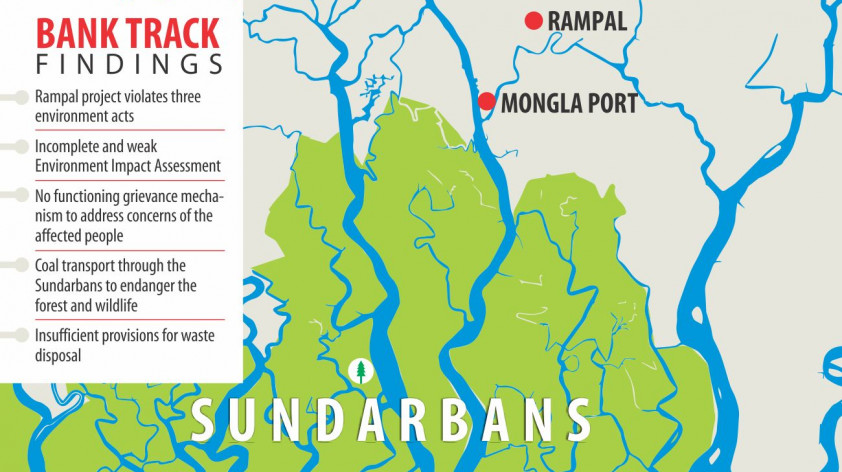 An international organisation has raised serious questions about the much-debated Rampal coal-fired power plant, saying it does not maintain the minimum social and environmental standards.

“The project poses significant adverse social and environmental risks and impacts that are diverse and irreversible,” said Bank Track, a Netherlands-based coalition of organisations “targeting the operations and investments of private sector banks and their effect on people and the planet”.

In a recent analysis, it said serious deficiencies in project design, planning, and implementation and due diligence obligations render the project non-compliant with the minimum social and environmental standards and the International Finance Corporation’s (IFC’s) performance standards.

However, the government as well as the Bangladesh-India Friendship Power Company Pvt Ltd (BIFPLC), which was formed to develop the Rampal project, claimed the 1,320MW plant would not harm the Sundarbans as international standards were being followed properly.

A tender for the project’s Engineering, Procurement and Construction (EPC) contract has been released and the bidding is due in the second half of the year.

Green activists are concerned the plant would lead to its environmental degradation from increased ship traffic, dredging, and air and water pollution.

Coal-fired thermal power plants belch toxic gases that could impact wildlife and human health, and forest quality in the neighbourhood, leading the country’s many environmentalists to continue their call to scrap the plant.

Bank Track has based its analysis on the Equator Principles (EP), an environmental and social risk management framework for financial institutions, and found that the project fails to comply with six of the 10 principles of the EP.

The plant, which will be comprised of two 660MW supercritical units, is estimated to burn 4.72 million tonnes of imported coal each year.

The coal will be transported by a fleet of vessels travelling along a route that cuts directly through the Sundarbans for a distance of approximately 67 kilometres. It is estimated that 59 ships will make the voyage each year to meet the plant’s coal requirement. All ships will anchor at Akram Point — located within the Sundarbans — where massive loads of coal will be offloaded to smaller vessels, running the risk of coal spillage and toxic coal dust being released into the environment, Bank Track warned.

It also questioned the Environmental Impact Assessment (EIA), conducted by the Centre for Environment and Geographic Information Services (CEGIS), a public trust under the water resources ministry.

First released in January 2013, the assessment drew severe criticisms from environmentalists and civil society members for being blatantly biased in favour of the project and for failing to meet international standards.

The CEGIS subsequently modified the assessment and a revised EIA was published in July that year.

“However, there are many serious concerns that remain unaddressed in the revised EIA,” said the Bank Track analysis.

It said serious deficiencies include failure to carry out a separate EIA on the impacts of transporting coal through the Sundarbans; insufficient assessment of factors and risks relating to water consumption, transport and disposal of coal ash, and waste management; and weak assessment of impacts on existing livelihoods, in particular impacts on people who depend on the Pashur river and the fisheries and other resources within the Sundarbans.